KANJI Premium 'The Road to Black' belt represent the ultimate in design and durability. Considerable research and development went into making the KANJI premium belt, setting the bar as one of the highest quality belts in the market today.

Pre-Embroidered "The Road to Black Belt" in Kanji Original Belt.

*ALL BELTS NOW COME IN A GIFT BOX

BELT DETAILS:
SIZING:
It can be 1-2inches different from the size chart.

First drawback I noticed was that main logo was not stitched properly (see pic.1), so it is already puffing up (see pic.2) and will be definitely teared off.

Then I was shocked even more. I realized that there wasn't black bar on the opposite end of the belt! There wasn't any bar at all (see pic. 3)! Hey, guys, this is a BJJ belt, isn’t it?

I could not even realized that the premium belts, which many champions wear, might be so bad in terms of quality control. So, it is like a lottery – you never be sure about the quality.

Finally, what the most disappointing is kanjibrand customer service just does not reply. I sent them a letter, then reminder and a week later still have no any reply. All premium brands I dealt with before never behave like this.

Although design of the belts are very nice, think twice before placing an order. 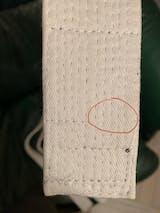 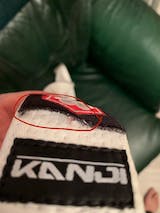 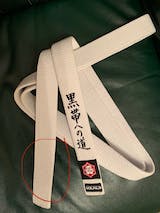 Very good belt , beautifull, top quality. Amazing belt , the box is also beautifull. For the gift is perfect. Just a negative point, the shipping, and tax. 100 € is realy expensive .

I bought the “road to black belt” white belt and this belt is amazing!!! Very sturdy, thick, large and solid! Only downside is that its pretty expensive just for a belt (with tax and shipping, I paid almost 100$ CAD)